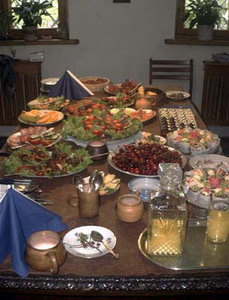 Ukrainian cooking uses black pepper, red pepper, salt, bay leaf, parsley and dill (usually in spring and summer), garlic and Onion. Staples include potatoes, cabbage, fish, Pork, Beef and Sausage. Ukrainian people eat many dishes made of Potato. During the Soviet era, there were chronic shortages of food. However, as Ukraine is an agricultural country, today there is much meat in the market (Beef, Pork, chickens, Turkey) as well as cheese, butter, bread and milk. However, for some items, notably cheese, prices are still very high. The core of the Ukrainian cuisine originates in the peasant dishes based on grains and staple vegetables like potatoes, cabbage, beets and mushrooms. Meat is an important ingredient in most Ukrainian dishes, and it is prepared in different ways, either as stewed, boiled, fried or smoked. Popular Ukrainian snacks include the varenyky and the most appreciated traditional dish is pig fat – called salo. The fact that Ukrainians preserve and age salo as one of their most prized national cuisine elements should give you an idea about the overall style of the Ukrainian cuisine – it is not a suitable one if your goal is to stay thin. Borscht originated in Ukraine and it is the national soup – although bortsch is now an international dish that is also very popular in surrounding regions, such as parts of Russia and Romania. Ukrainian restaurants are not the number one place to go when you are looking for a traditional Ukrainian meal – the best way to experience the Ukrainian cuisine is at a home made meal.

The history of the Ukrainian cuisine is long and tumultuous, and there were numerous outside elements that influenced it profoundly. Until the 17th and 18th century, the Ukrainian cuisine was mostly characterized by peasant and rural made dishes. Simple and economical soups, without much ornament, and consistent yet very easy to cook meals were the main parts of the Ukrainian diet. Things changed when the tsars began calling French and Italian chefs to cook for their banquets and celebrations. The luxury and festive style of the dishes prepared by foreign chefs soon began to influence the existing Ukrainian cuisine. Although most dishes were kept in their traditional form, modern variations of those dishes are present in most Ukrainian homes today. New spices and herbs were used to improve the flavor of the existing traditional Ukrainian dishes and today you shouldn’t be surprised to find plants that are not characteristic to Ukraine used in traditional, home made dishes. As for finding American food- the large cities have specialist restaurants with Western cuisine for tourists, and these are beginning to filter down into the medium sized cities. Small towns and villages may not have any public food services at all, although grocery stores and street markets are common.

There are no distinguishable cuisine types in Ukraine, but a variety of different influences can be noticed by a careful eye. The neighboring countries have influenced the Ukrainian cuisine, much as the Ukrainian cuisine influences the regional and national cuisines of the neighbors. The Lviv or Luts’k regions of Ukraine, for example, display a cuisine that resembles the Polish cuisine, with Pork meat being the main ingredient for most dishes. The north-eastern provinces, such as Sumy, Kharkiv or Luhans’k show influences from the Russian cuisine, while the southern part of Ukraine has several recipes that are specific to Moldova and Romania. Agriculture has always been used extensively in Ukraine and Wheat, Rye, Oats and millet were the main ingredients for any meal for centuries. Bread was and still is one of the food elements that are never absent from a Ukrainian meal. Bread is used with soup and the main course, although sometimes it may be left aside if the dish contains potatoes or pasta. Bakery was also present since immemorial times and all grain based food products used in the past are still present today, in one form or another. Meat is yet another essential element in the Ukrainian cuisine. Hunting was extremely popular in Ukraine and it ensured a large proportion of the meat that Ukrainians consumed. Wild animal meat was gradually replaced by farmed animal meat. Fish is also popular with a large variety of dishes, and there are hundreds of fish species that are used in delicious dishes.

The simple and rustic cooking style that characterizes a large percentage of the Ukrainian cuisine is also complemented by modern dishes that are extravagant and unique, most of them developed by international Ukrainian chefs. The Ukrainian cuisine uses elements from various cooking traditions borrowed from their neighbors and developed from their own traditional dishes. While there are no specific or unique preparation methods for Ukrainian cooking, we should point out that attention to detail is important in the Ukrainian cuisine. Each traditional dish has a special cooking method, which is more or less general in all of the country’s regions. Meat is one of the main elements of most Ukrainian dishes and cured and smoked hams, poultry, Pork and Beef fillets, and bacon back baby are often parts of delicious dishes. Smoked fish as well as other fish meat types are widely appreciated, and cooking styles may differ from highly specialized restaurant cooking to simple, rustic cooking methods. Although the traditional cooking styles for most Ukrainian dishes go back to hundreds, if not thousands of years ago, today most cooking is quite similar to any western European cuisine.

Here are a few of the equipment items you might find in a Ukrainian kitchen: cake pans, can openers, colanders, egg rings, poachers and holders, food dishers & portioners, food pans & food containers to other kitchen utensils, such as food scales, food scoops and fryer baskets & accessories. The Ukrainian cuisine needs a diverse cooking equipment set in order to produce the most sophisticated Ukrainian dishes, but the traditional recipes can be cooked with only a fire source and a few pots and pans. Essential utensils like serving spoons, spatulas, forks, turners, scrapers and tongs should also be part of your cooking “toolbox”, especially if you are determined to make the most out of any meal you prepare and serve. Here are a few other items that will come handy while cooking Ukrainian food: juicers, kitchen knives, kitchen slicers, kitchen thermometers, measuring cups & measuring spoons, miscellaneous utensils, mixing bowls and skimmers & strainers. All of the enumerated items can and will be useful at some point, but they are more likely to be specific to restaurants, rather than traditional Ukrainian homes.

Although most Ukrainian festivals involve the culinary arts to a certain extent, Christmas is the most predominant holiday where food plays an important role in the festivity. Ukrainian Christmas customs are based not only on Christian traditions, but to a great degree on those of the pre-Christian, pagan culture and religion. The Ukrainian society was basically agrarian at that time and had developed an appropriate pagan culture, elements of which have survived to this day. A kolach (Christmas bread) is placed in the center of the table. This bread is braided into a ring, and three such rings are placed one on top of the other, with a candle in the center of the top one. The three rings symbolize the Trinity and the circular form represents Eternity. Kutia is the most important food of the entire Christmas Eve Supper, and is also called God’s Food. A jug of uzvar (stewed fruits, which should contain twelve different fruits) and is called God’s Drink, is also served. After all the preparations have been completed, the father offers each member of the family a piece of bread dipped in honey, which had been previously blessed in church.

There are many chefs who creatively use the basic ingredients and cooking method for traditional Ukrainian dishes and create original and delicious food variations. Ukrainian chefs are passionate about their traditional dishes and they enjoy presenting them to foreigners who have never tasted them before. Whether they are cooking Kutia or red beet soup, served with stuffed dumplings or more sophisticated Ukrainian dishes, such as the delicious Duck filled with apples, Ukrainian chefs take pride in what they do, and this is readily noticeable in the unforgettable taste of their cooking. Preserving the traditional, rural recipes and dishes is an important task for many chefs, and they do their best to keep the recipes alive by cooking them as often as possible and spreading word about them on an international level.

Retrieved from "https://recipes.fandom.com/wiki/Ukrainian_Cuisine?oldid=741479"
Community content is available under CC-BY-SA unless otherwise noted.