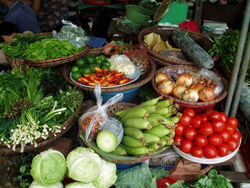 Rice is the staplefood in the Vietnamese cuisine as well as noodles made of rice. The rice noodles can be served from breakfast to dinner in the Vietnamese diet. The rice noodles are prepared in soups or even in meat dishes served served fresh or dried and may have different shapes. The Vietnamese diet is rich in vegetables and herbs such as cucumbers, bean threads, sprigs of basil, hot pepper, mint and coriander. Vietnamese cuisine is a reflection of its culture, traditions and history. In Vietnam there are two big rivers between which lies a chain of mountains. The Red River Delta is actually “the rice basket” of the Vietnamese people. The Mekong Delta produces rice, fruits and vegetables. As Vietnam used to be a Chinese colony, the main religions are Confucianism and Buddhism. The cuisine from North Vietnam has a deep Chinese influence, that’s why the soy sauce is used in preparing almost any dish in Northern Vietnam.

The fish sauce, named “Nuoc Mam”, is the most representative Vietnamese ingredient. The most used cooking method in the Vietnamese cuisine is simmering. The Royal tradition identified in the central region of Vietnam is that all the small dishes are placed on the table at once. In the south region of Vietnam, the dishes are larger but not so many as in the central region. The hot chilies, some sweet fruits, vegetables are sometimes prepared together in delicious meat dishes. The preparation methods aren’t difficult or sophisticated. All three main meals of the day usually contain noodles. Vietnamese food is popular in France and the United States. Vietnamese cuisine is an extremely healthy one; not only the vegetarian dishes, but also the meat ones are rich in fresh vegetables, flavorful herbs, and small amounts of meat or oil. Noodle Soups are served for breakfast. The noodle soups usually contain meat cubes, cilantro, basil, lime juice or slices, garlic sauce and green onions. There are Vietnamese soups served as main courses and are served in small portions and they are called “sup”.

Vietnamese cuisine is famous for its fresh and healthy meals, and is known as the Asian “Light Cuisine”. The Vietnamese dishes are rich in fresh vegetables and herbs, noodle dishes, grilled foods and light fruit deserts served with tapioca or rice with Sugar. It is composed of low fats dishes, being one of the healthier cuisines of the world. The cooking contains mainly Cantonese, Malay, Thai, and a bit of French elements. There are some regional differences, for example, in the Southern region of Vietnam; the region contains a great variety of seafood dishes. In the Northern region of Vietnam, beef dishes are very popular and in the center of Vietnam, the dishes have major influences from the ancient Royal cuisine. A typical dinner contains rice noodle soups, fresh greens and vegetables, rice paper served with dipping sauce, meat dishes, seafood dishes and hot tea. The cooking methods aren’t difficult at all and there is no need for special, sophisticated cooking equipment. The basic ingredients used in preparing Vietnamese dishes are: fish sauce, ginger, garlic, green onions, lemongrass, coconut milk and rice noodles. Rice is the most important element in Vietnamese cuisine and is used as the main ingredient in most courses. “Nuoc Mam” is the Vietnamese condiment added to most dishes. The “Fish Sauce” is made of salt and fermented fish.

The most used cooking method in the Vietnamese cuisine is simmering. For the Vietnamese Spring Rolls which are made of rice flour, tapioca flour, eggs, Sugar, salt, warm water, minced Pork, carrots, yam, shrimps, crab meat, spring Onion, coriander, garlic, shallot, ground white pepper, Chicken seasoning powder, salt, Sugar, egg, wood ear mushrooms, lettuce leaves, Thai basil, mint, cucumber and fish sauce, the cooking methods are basic one such as stuffing, simmering and frying. The first step in preparing this Vietnamese dish is to combine the net wrap ingredients and to leave them for about 2–3 hours. The oil is heated and then the spring rolls are added to fry. Examples:

Vietnamese cooking doesn’t require special, sophisticated equipment for cooking traditional dishes. The basic equipment of a kitchen: soup ladles, food pans, or mugs, ovens, grills, saucepans, woks and the right ingredients are sufficient for preparing a Vietnamese dish. For example, in preparing the fried rice with Sausage, shrimp and crab named “Com Chien Thap Cam”, the main ingredients are: long grain white rice, Chinese mushrooms, Chinese sausages, raw shrimp, vegetable oil, onions, fish sauce, crab meat, eggs and scallions. The cooking equipment used in preparing this delicious dish is basic: a sharp knife, a large pot, a large bowl, a wok, an oven and a fridge. The preparation method goes like this: the rice needs to be prepared a day before and stored in the refrigerator overnight. The Chinese mushrooms are put into a small bowl with water in which they will be kept for at least 20 minutes. The mushrooms need to be rinsed and sliced into thin strips. The onions needs to be chopped, the scallions washed, trimmed and cut into small pieces. The shrimps need to be shelled and chopped, the sausages cut and fried over moderate heat. All ingredients are mixed together and cooked for about five minutes.

The Vietnamese food culture is rich in traditional foods and customs. There are several Vietnamese soup customs, such as: the noodle soup needs to be served first at breakfast, in big bowls. The Vietnamese noodle soup may contain meat cubes, seafood, fresh green and vegetables such as bean sprout, cilantro, basil, lime slices, spring onions or chili peppers. Most Vietnamese dishes need to be spiced with the traditional fish sauce called “Nuoc Mam”, chili and garlic sauce or “hoisin” sauce. The rice noodles are mixed with vegetables, herbs, raw meat and seafood and they are all cooked in the broth. “Pho” means “your own bowl” and it became very popular in the United States. “Pho” is actually the noodle bowl which is the only Vietnamese dish that is not shared or passed around like all the other dishes when eating together. Vietnamese cuisine is very popular in some European countries such as France, Germany or Poland and also in Australia, Canada and in the United States. That’s why Vietnam is always invited to take part at various International food festivals. There are also national food festivals during which the Vietnamese people are celebrating the history, culture, culinary habits, enjoying the dishes prepared by talented cooks.

Retrieved from "https://recipes.fandom.com/wiki/Vietnamese_Cuisine?oldid=719918"
Community content is available under CC-BY-SA unless otherwise noted.