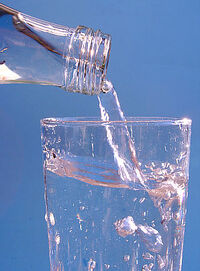 Water is both added to food as an ingredient and used to transfer heat for cooking.

For both such purposes, the water should be generally drinkable. Water is a common source of disease organisms. Boiling water for about 5 minutes should take care of this problem. Baked goods containing water also need to be kept at a boiling temperature to prevent the spread of disease.

When adding water to a fermented food, it is generally best to use water with little or no chlorine. Chlorine is added to water to kill harmful microbes such as bacteria, and as such, can change how well a fermentation progresses, by slowing it down or even by ruining it.

Commercial yeast ferments like beer are not as sensitive to chlorine as yeast / bacteria ferments like sourdough, but often still benefit from chlorine-free water as it also affects the taste of the final product.

Chlorine can be removed from tap water by boiling for a few minutes and leaving to cool. Also, leaving uncovered overnight (e.g. in the refrigerator) will reduce chlorine. However, some water suppliers are now using the more stable chloramine instead, which cannot be boiled out and will remain stable in water for longer periods. Many water filters will remove both chlorine and chloramine.