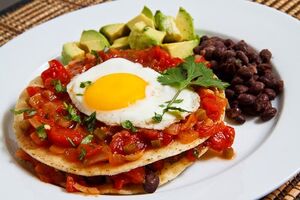 This is my entirely inauthentic version of huevos rancheros made with the object of avoiding spiciness and using what I have access to in local general-purpose grocery stores in New England circa 2012.

The salami can obviously be substituted for some other sort of breakfast meat but I was going for something inexpensive that would have a sharp flavor but not be chorizo-spicy and I liked the way that salami turned out. Refried beans can be substituted for the canned beans as desired. Salsa and other conventional seasonings added to the mix can be efficacious.

Breakfast for one person.

Retrieved from "https://recipes.fandom.com/wiki/Yankee_Huevos_Rancheros?oldid=682875"
Community content is available under CC-BY-SA unless otherwise noted.