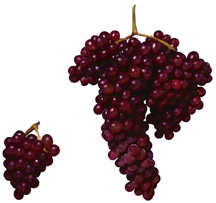 A Zante currant (Vitis vinifera) is a variety of small, sweet, seedless grape named for the Ionian island Zakynthos. It is usually used for making raisins and, occasionally, wine. When dried, they are often referred to as dried currants and are used in cooking, especially baking. Zante currants are very small and intensely flavoured. They are not usually eaten 'raw' but they are the major ingredient in currant slice and currant cake.

They are not related to the currant berry in the ribes family.

In the United States, where California is the major grower, this tiny (⅛ to ¼ inch in diameter) purple grape is predominantly used to make the dried currant . The seedless, very sweet Zante grape also still flourishes in Greece, where it originated. Fresh Zantes can sometimes be found from late summer to late fall in specialty produce markets. Trendy restaurants often use tiny clusters of them as a garnish. They're available year-round as dried currants.

Zante is a Greek island situated in the Ionian Sea. Zante grapes are very popular in Greece and they are usually enjoyed fresh. According to some archaeologists, grapes were one of the earliest cultivated fruits throughout the world. Grapes originate in the Black Sea region and they spread very quickly towards the Middle East. Despite this, some say that rapes were first cultivated in Mesopotamia around 6,000 BC from where they spread eastward to Egypt. Anyway, some grapes are descendants of European varieties. It is considered that 3,000 years ago the first raisins were sun-dried, as it happens nowadays, as well. Zante grapes are nutritious, representing a great source of vitamin B, potassium, iron, and fiber. These grapes do not have seeds and have a very dark colour, being about a half of the size of other raisins. They can be eaten fresh or used as main ingredients in fruit salads, jams, syrup, and cakes. Zante grapes contain a great amount of sugar and have a special flavor.

Retrieved from "https://recipes.fandom.com/wiki/Zante_grape?oldid=622720"
Community content is available under CC-BY-SA unless otherwise noted.