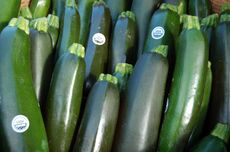 Wikipedia Article About Zucchini on Wikipedia

Zucchini (US, Australian, and Canadian English) or courgette (New Zealand and British English) is a small summer marrow or squash, also commonly called Italian squash. Its Latin name is Cucurbita pepo. It can either be yellow or green and generally has a similar shape to a ridged cucumber, though a few cultivars are available that produce round or bottle-shaped vegetable. Unlike the cucumber it is usually served cooked, often steamed or grilled. Its flower can be eaten fried or stuffed. Zucchini is commonly thought of as a vegetable, being the swollen ovary of the zucchini flower.

Zucchini is one of the easiest vegetables to cultivate in a temperate climate. As such, zucchini has a reputation among home gardeners for overwhelming production, and a common type of joke among home growers revolves around creative ways of giving away unwanted zucchini to people who already have been given more than they can use.

In 2005, a poll of 2,000 people revealed the courgette to be Britain's 10th favourite culinary vegetable. In Mexico, the flower (known as Flor de Calabaza) is preferred over the vegetable, and is often cooked in soups or used as a filling for quesadillas.

A slender, tube-shaped summer squash, have edible green, yellow, or green-and-cream skin and pale, tender flesh. Small zucchini have a finer texture and flavor and tinier seeds than fully matured zucchini; these baby zucchini are sometimes sold with their edible flowers still attached. The delicate blossoms can be used in pasta sauces or can be stuffed and sautéd. Zucchini are also known as courgettes.

Zucchini is the most popular summer squash purchased in the United States. Zucchinis come in different shapes, from long and narrow to short and round. Zucchini range in color from dark green to lighter shades of green and yellow. Some have stripes, and many are highlighted with speckles. Zucchini squash is so plentiful in home gardens that there is an "official night" for getting rid of it: National Sneak Some Zucchini On To Your Neighbor's Porch Night (August 8).

Choose zucchini that are firm and fairly heavy for their size, otherwise they may be dry and cottony inside. Look for squash that have bright, glossy exteriors. Avoid buying zucchini that have nicks or bruises on their skins or ones that have soft spots.

Place zucchini in plastic bags and store in the refrigerator. Fresh zucchini squash should keep for up to a week.